Mariners of ages past had to contend with, among other things, two issues dealing with nutrition: Scurvy, and bad water.

Scurvy is a rather nasty, and potentially fatal, condition brought on by a lack of Vitamin C in ones diet. It's cause was long a mystery, but even before it was isolated in the 20th century, it was often treated with fresh fruit, particularly citrus.

Unclean water in unclean containers tends to go bad in short order due to the presence of bacteria, mold, or other contaminants. Since the notion bacteria, mold, and other contaminants wasn't really understood until relatively recently, vessels going on long journeys started to substitute beer for water because, unlike water, it didn't go bad. In some navies, this eventually took the form of the Rum Ration, even until quite recently.

Sailors have also long had a history of being heavy drinkers*. Looking at common drinks associated with sailors, it's not too far of a stretch to think that the combination of citrus and rum on sailing vessels and in ports of call over the course of centuries had a strong influence on what they drank. One of my favorite "sailor's" drinks, one that I will often enjoy after a day of sailing, is a Dark 'N Stormy. The recipe calls for dark rum and ginger beer to be served over ice with a wedge of lime. I find them quite delicious.

I am not typically one for messing around with a good thing, but there are two things that I admittedly don't like about Dark 'N Stormies: having my drink watered down by melting ice (true of any drink served on the rocks), and having to slice a lime after a hard day's sail just to enjoy a good drink (true of any drink requiring a wedge of citrus). These dislikes mulled around in my head for a while, and eventually I came up with an idea: replace the water in the ice cube with the ginger beer, and freeze a pre-sliced wedge of lime into the ice cubes.

After some trial and error (admittedly, and unfortunately, not on a boat yet), I came up with the Ginger Lime Cube:

1. Take one can of your favorite ginger beer and fill an ice cube tray with it. As fate would have it, one 12 oz. can will fill a typical ice cube tray almost perfectly. Coincidence?

2. Take a lime and cut four slices out of it, leaving the ends aside. Take those four slices and cut them each into quarters, yielding sixteen lime wedges. A typical ice cube tray has 16 slots. Again...coincidence?

3. Take the remaining parts of the lime (it should just be the ends) and give them a squeeze over the trays. We don't want to be wasteful.

4. Plop the ice cube tray into the freezer and wait.

At this point, you can take your Ginger Lime Cubes, pack them in a cooler with ice, cold packs, etc., and bring them along with you on a sail. Then, once you're ready for a drink:

5. Put two cubes into a cup (I prefer lowball glasses on land) and fill the cup with enough dark rum to cover the cubes.

6. Wait a minute or two, and you'll have a perfectly chilled and flavored, yet not watered down, Dark 'N Stormy. If you are the impatient sort, stirring will help pass the time, even though it won't really help anything melt. 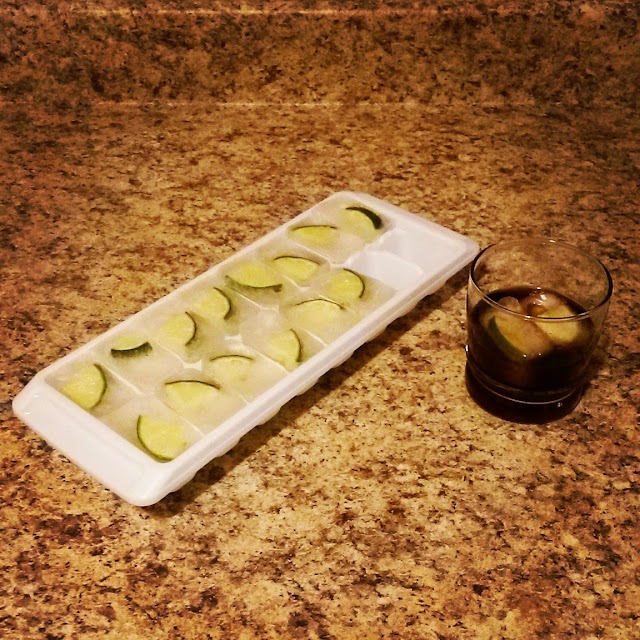 This also works with one of my other favorite drinks, the Moscow Mule, which is essentially a Dark 'N Stormy but with vodka instead of dark rum. I like to think that it's popular with Russian sailors, but I don't really know. Maybe one day I'll find out.

So the next time you set sail, try bringing along some Ginger Lime Cubes to make your Dark 'N Stormies (or Moscow Mules, or any other drink with ginger beer and lime that you happen to like) and let me know what you think*.

*(Please drink responsibly, heed the Surgeon General's warnings about drinking while pregnant, don't operate any heavy machinery while intoxicated, and be sure that if you pass out that your friends have access to your phone to take embarrassing pictures of you.)
Posted by Ben at 12:13 AM